A nagging issue with solar power plants is that they generate power according to a schedule driven by irradiance, sun position, and characteristics of the power plant, but not according to the customer’s demand. Wouldn’t a great solar power plant product cater to a customer’s schedule? In many places, people use more power during the day than at night so daytime generation roughly meets demand well – at first. As more and more solar is added to a grid, the peak net demand shifts into the evening, and the value of the contributed solar power falls during the day. (Some nice analysis on this by Bollinger, Seel, and Robson at LBNL among others shows this.) The importance of responsiveness is increasing where there is copious solar on the grid.

Concentrated solar power (CSP) technology with integrated thermal energy storage promises to provide solar power that can more closely cater to customer demand. Coming in at ~1% of the total solar install base, CSP, well, lost the race to PV over the last decade. This is superficially explained by high cost. A quick look at why the cost is so high suggests that performance at a high level does not seem as much of an issue as practical matters.

About the storage system, thermal energy storage integrated in a CSP plant does have some sense to it. First, it’s comparatively simple. Typically, the energy storage system consists of two very large tanks of molten nitrate salt with pumps, valves, heat exchangers, and piping to move it around. Compare this with a large lithium ion battery system, which requires hundreds of thousands to millions of battery cells. Second, the molten salt system should last many years without degradation unlike lithium batteries. Efficiency is near 100% too since energy is not converted back and forth from AC power to chemical or thermal energy. Leading alternatives to batteries, like flow batteries, pumped storage, and thermodynamic systems all take a bite out of the energy given to them before giving it back to the grid. The molten salt system is also integrated as part of the solar plant so it is not a big extra project to do. While managing molten salt has its technical challenges, it has now been done in a number of large scale plants.

When something gets called “too expensive,” this implies the product is competing on cost and not on the value of what distinguishes it. A straight cost comparison between solar PV and CSP implies no value for CSP’s energy storage. A robust electric grid can accept some amount of solar power without storage. Indeed, in the continental U.S., storage has not commanded much value through the 2000s and 2010s (although this is changing in California as the LBNL team and others have shown). The value of storage has been hard to quantify too, though a team at NREL and others have steadily addressed this. Customers willing to pay CSP’s premium for energy storage were hard to find over the last decade.

A major issue for CSP cost is product maturity. Around the world, at least thirteen central receiver plants with molten salt storage have been built, as noted in Table 1 (I could find details for 11 of them). An example is shown in Figure 1. Yes, the industry is gaining some experience, but this is not enough to drive fast cost reduction. If companies can develop a pipeline of projects in a single country, it can do things like push its suppliers for cost reduction, localize production to cut shipping costs and execution timeline, spend on engineering, develop experience with construction teams, build a track record for financing, and cater to local customer requirements and local regulations. One exception is China where a number of projects have been completed or are underway.

(Note that I’m focusing on central receiver and linear Fresnel style plants rather than parabolic troughs because of the ability of these two to do higher-temperature storage and steam cycles.)

CSP plants use a steam power plant to generate electricity, and these become much more economic with increased size. The solar field also gets smaller with increased tower height. The tendency then is to do big projects that are more economic – on paper. However, when it comes to driving down cost by gaining experience, big projects are not the best because they take a long time and involve more risk. Also, the pool of people who can green-light an investment gets smaller as the investment size goes up. A sad case is the first and only molten salt central receiver plant in the U.S., which cost $1bil. The Crescent Dunes project features an elegant design but is now mothballed for reasons of project execution and engineering. A relevant question for CSP might be how to execute smaller commercial projects economically to accelerate learning.

Technical performance is another factor that drives cost. Since solar plants use equipment and land to make power, two useful power density metrics are therefore:

The aperture is the surface that light hits. In PV, it is the panel area. In CSP, it is the mirror area. Energy means AC power delivered the grid. Applying a crude but simple correction helps adjust for solar resources of different places. Let’s pretend all the plants are in Phoenix, AZ by using a multiplier of direct normal irradiance for the CSP plants. These two power density metrics are calculated as:

The idea here is that at high deployment volumes, the cost will be roughly proportional to the aperture area. (Yes, we’re painting in very broad brush strokes here.) Land is dear in some places and not in others. Plant designs that use land sparingly can be used for more projects in more places. 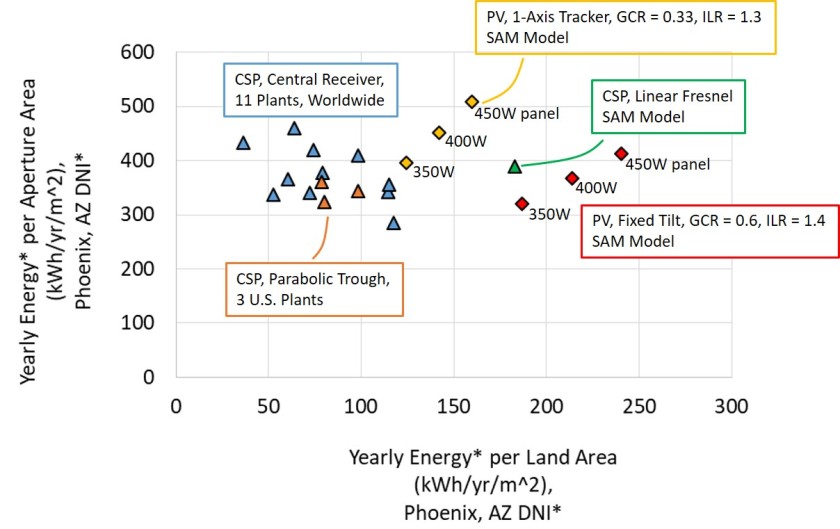 The highest energy density CSP central receiver projects generate comparable energy per aperture area as a PV single-axis tracker plant. From an aperture energy density point of view, the technologies are relatively competitive. CSP power density isn’t the problem. CSP central receivers appears a step behind with land usage, but this is not an issue for many project opportunities.

Both technologies are improving. The PV industry continues its inexorable march toward ever-increasing power output. Front-side panel power output continues to increase. Also, bifacial panels offer perhaps a 10% boost in power from diffuse light hitting the back sides of the panels. In CSP, linear Fresnel technology is nearing another milestone. FRENELL, based in Germany, is constructing the first two linear Fresnel projects that incorporate molten salt storage. Encouragingly, these projects are each under 10MW, showing $1bil. is not necessary to prove the technology. This design features substantially better land utilization at competitive aperture area energy density, as the SAM simulation shows. Other CSP developments are underway as well. For example, 247Solar’s gas turbine system expects to deliver step-change improvements in aperture energy density and overall cost versus molten salt tower designs.

CSP technology has claimed only 1% of the total solar installation base, and that sure sounds dire. Performance in terms of power density tells a more hopeful story. Although boosting power density generally helps with cost reduction, this does not appear to be the problem for CSP. Other issues like design complexity and feasibility at modest size may be more critical impediments. Perhaps with continued innovation, there may be a role to play in the future for a technology that competitively utilizes equipment and land and also delivers power when it is most needed.